Sadistic Introduction to a Masochistic Book

Sadistic Introduction to a Masochistic Book is Supervert's introduction to Leopold von Sacher-Masoch's Venus in Furs (published by Bookkake, 2008). 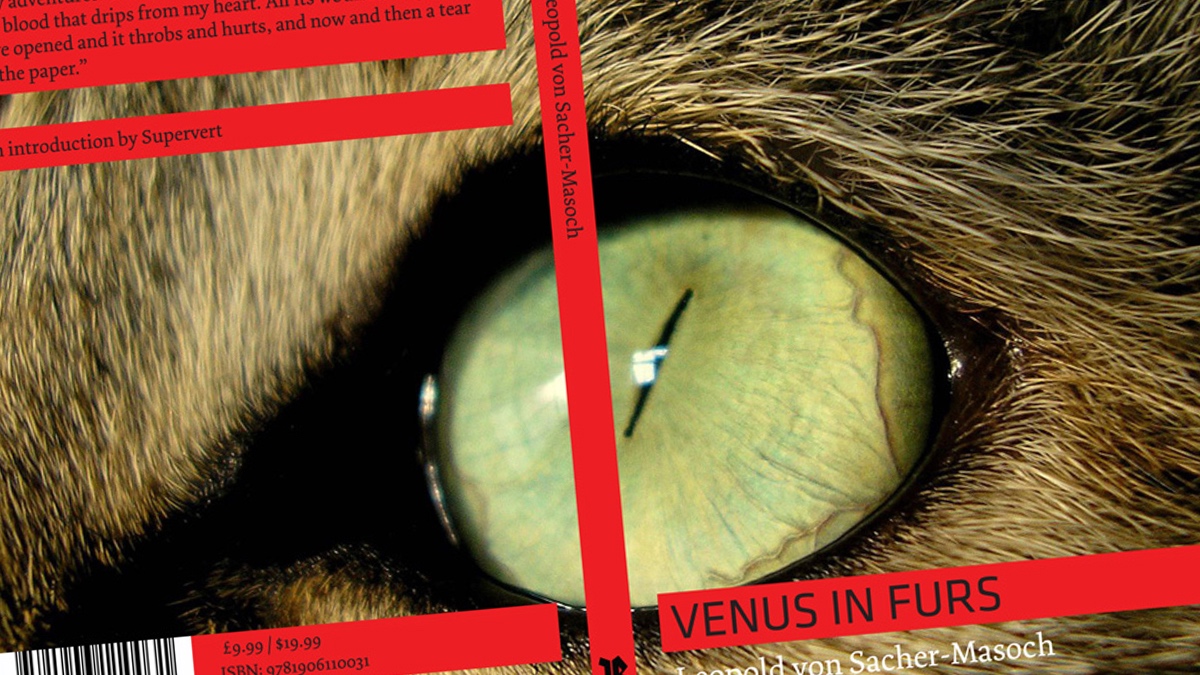 It is my intent to destroy any enjoyment you could possibly derive from this book.

You may think you're seated comfortably, or perhaps lying curled up in bed, but that's just your body. In your mind there is only one posture for reading — a posture of submission. When you read you are always on your knees, humbly accepting your lessons from the writer god. Every reader is a zombie, a slave, a robot who wants to be programmed and controlled. You set aside your own thoughts for mine. Do it. Now.

If you think a writer has any regard for his readers, think again. Only the basest form of writer cares one whit about his readers. For a great writer, the reader is just an obstacle between him and fame. That's why the great books are always so difficult to comprehend. Look at Finnegan's Wake. That book doesn't make any gestures of compromise. That book doesn't care about you. The only epiphany to be had with Finnegan's Wake is to understand that, in the writer's universe, you are the equivalent of a worm or a cigarette butt. Joyce grinds you into the ground with his heel.

But I don't want to tell you all this. Maybe it's useful for you to know. Maybe it's not. Frankly it bores me and I don't care about you anyway. The important thing here is my pleasure. The writer is the master in the literary relationship. The reader is the slave. If I want to tell you about Venus in Furs, you'll listen. If I don't, you'll listen anyway. You have no choice. I'm the voice around here. You're the ear. Get used to it.

If you expect me to say anything enlightening about this book, you're stupid. I don't want to shed any light on this piece of garbage. I want to say things that obscure this book, cast it in the dark, bury it like an animal buries his shit. That's what other writers have done. Freud doesn't mention Sacher-Masoch once in his extensive discussions of masochism. Nietzsche, who had probably read Sacher-Masoch and was deeply interested in master-slave relations, doesn't mention the author of Venus in Furs either. Spengler doesn't include him in Decline of the West. Kafka, who drew on Venus in Furs for "The Metamorphosis," never mentions Sacher-Masoch by name. Joyce, who harbored masochistic tendencies, refers to Sacher-Masoch twice in Ulysses. But that's the exception and not the rule. Overall the attitude of other writers toward Sacher-Masoch is that of Henry James: "I never read a word of Sacher-Masoch. I read very little fiction & had been warned off from him."

Warned off — why? Because as a scribe Sacher-Masoch doesn't have much to teach. His biographers admit that the quality of his work declined precipitously after Venus in Furs. This "masterpiece" itself is written in little vignettes, like gasps between whippings. But even here look at the way Sacher-Masoch botches the description of his own fetish for fur. Wanda mocks the comparisons he invokes: "'A woman wearing furs, then,' cried Wanda, 'is nothing else than a large cat, an augmented electric battery?'" An electric cat, a feline battery — that's really erotic. That's really perceptive... No, that's really a mixed metaphor. Ugh.

Then again, if Wanda mocks him, doubtless it is because he wants to be mocked. Sacher-Masoch disavows the clinical mastery of his symptoms because he wants to be not their master but their servant. Every word is calculated to elicit loathing and contempt. Sacher-Masoch oversimplifies (you have to be master or slave). He mixes metaphors (a feline battery?). He contradicts himself. Look at how he bungles his own symptomatology. He considers it not masochism, which didn't exist as a clinical entity, but suprasensuality (Übersinnlichkeit). "I grew more confused each day, more fantastical, more suprasensual." He takes a concept with roots in Platonism — the suprasensual as a realm literally above the senses — and declares it the root of his desire to undergo the most excruciating sensual experiences. It makes so little sense that it can only be a stratagem to involve you in his fantasies of punishment. If his ideas are all wrong, it is because Sacher-Masoch wants to be not correct but corrected.

Sacher-Masoch spurns everything that would make you respect him as a man — has there ever been a greater example of Sartre's ressentiment than this worm who choreographs his own humiliation and then complains about it? — and as a writer. Sacher-Masoch is a manipulator who plays the slave and a writer who pretends to be a reader. His stand-in, Severin, constantly talks about his reading: "I read Homer, Virgil, Ossian..." He reads aloud to Wanda. He's prone to quoting. When he threatens to kill her, Wanda retorts: "What play is this from?" It is as though Sacher-Masoch wants to debase himself to the level of the reader. No wonder other writers shun him. What writer doesn't want to be the author of masterpieces? Sacher-Masoch. He would have preferred to write slavepieces. He wants you to despise him. The decrepitude of his art is the sign of his effort to humiliate himself in front of the reader.

In one episode Severin writes a poem called "Venus in Furs." When Wanda takes the manuscript away from him, he can't keep working on it because he can only remember the first stanza. Can't you see that that's what the author really wants from you? He wants to be punished, and the way to punish a writer is to gag him. "Silence, slave!" The worm would probably be thrilled if you would take over all the verbiage — if you would become the writer, take a copy of Venus in Furs, scratch out your own narrative on top of it, like a literary version of Robert Rauschenberg's Erased De Kooning Drawing. Sacher-Masoch would have loved that. Erase his book.

(It has been suggested by a psychologist in the Journal of the American Academy of Psychoanalysis that Sacher-Masoch might have ghostwritten his wife Wanda's stories and even her famous memoir. Certainly you can imagine Wanda compelling her slave to write texts which she could use to humiliate him by publishing them under her own name. This would not have had the effect of erasing his work, but it would at least have erased Sacher-Masoch's name.)

As a reader this puts you in a difficult position. On one hand, you feel that you would be only too happy to oblige Sacher-Masoch. You could take pleasure in humiliating this maddening book. You can imagine opening it up, working up a ball of spit in your mouth, hacking it between two random pages and slamming them shut. That's what this worthless logorrhea deserves. With any luck the ink and spit will smear and you will end up with something more interesting that this miserable tome: a Rorschach test.

On the other hand, isn't Sacher-Masoch manipulating you into this? Do you really want to let him control you like that? The masochist positioning the sadist — it's the perfect example of what Nietzsche means when he talks about slaves ruling over their masters. In his essay "Sade's Reason," Maurice Blanchot notes that "with Sade's heroes the pleasures of debasement in no way reduce their mastery, and those of abjection raise them to the heights." The opposite is true of Sacher-Masoch's heroes. The pleasures of torture in no way elevate their abasement. To the contrary, it is the torturers who feel degraded by the victim, who are manipulated by him into doing and saying things they don't really want to do. That is Wanda's constant dilemma: the whip is being put in her hand.

This is not to say that Sacher-Masoch is a simple inversion of Sade. In his essay "Coldness and Cruelty," Gilles Deleuze argued this very persuasively: "The theme of the unity of sadism and masochism and the concept of a sadomasochistic entity have done great harm to Sacher-Masoch. He has suffered not only from unjust neglect but from an unfair assumption of complementarity and dialectical unity with Sade." But to whom is this comparison really unfair? Does being compared to the divine marquis hurt the mostly mediocre work of Sacher-Masoch? (If it did, Sacher-Masoch would like it anyway.) Or does being compared to the pathetic chevalier diminish the greatness of Sade?

If I weren't confined to the front matter of this book, I would pop up at different moments of the narrative and show you just how inferior it is to a monument such as 120 Days of Sodom. For example, I would stop the action at one of Sacher-Masoch's idiotic little raptures about nature. Here you are reading the book for its lurid subject matter and this craphead of a writer has to interrupt it with an idyll to flowers or moonlight. If somebody ever wants to pay me — you couldn't pay me enough — to translate this moronic tale, I'd take passages like this

What solemnity! What music round about! A nightingale sobs. The stars quiver very faintly in the pale-blue glamour. The meadow seems smooth, like a mirror, like a covering of ice on a pond.

or perhaps I'd just delete it. Why waste my time and yours? Or rather, why waste my time? Yours is a matter of indifference to me. You're just a servile reader. Ugh. You disgust me. To paraphrase Wanda, you don't mean any more than a dog — and dogs get kicked.

This book is like the rim of a dirty toilet seat. If you want to lick it, I won't be the one to stand in the way of your degradation. In fact, that may even be the best reason to publish the thing — so you can debase yourself with it. Prepare yourself, slave. Accept the punishment you deserve. Read this book. Do it. Now.