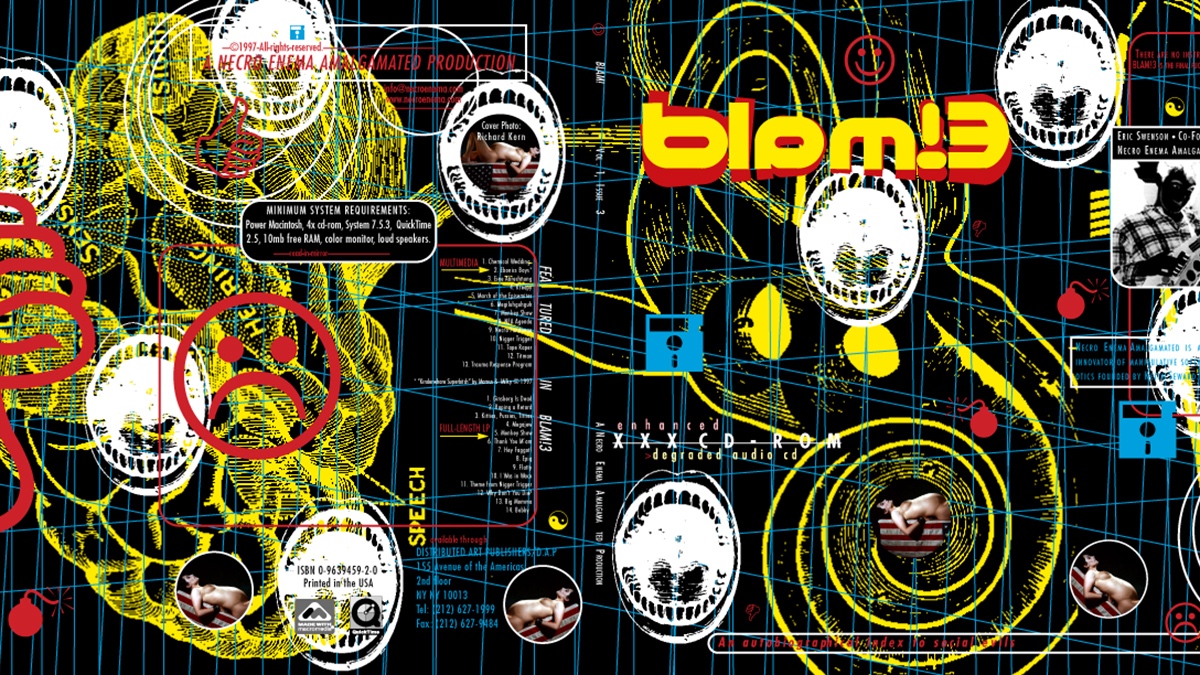 “In manipulating the user to a parodic extreme, BLAM! muffles the liberation song with the moans of sadistic programmers and the groans of frustrated users. NEA doesn't just endeavor to show us how we are controlled by allegedly interactive programs — it revels in the spectacle of our enslavement.” — Lingua Franca, Summer 1998

In the 1990s Supervert (before there was Supervert) joined forces with partner in crime Eric Swenson to form Necro Enema Amalgamated. We described ourselves as a "Devil's Advocacy group and entrepreneurial innovator of manipulative software, subliminal semiotics, and coercive advertising." We put out a notorious series of CD-ROMs titled BLAM!. The disks were insane, controversial, obscene. They were products of a time and place — New York's East Village of the 1990s, punk, No Wave — yet they were also harbingers of the future. They were "digital art" before anyone talked about digital art.

The three BLAM! disks — released in 1993, 1995, and 1997 — achieved a jarring mixture of praise and opprobrium. On one hand, the damn things were impactful, gorgeous, fast. They looked like nothing that had ever been seen on a computer before — or since. They pushed at the limits of interactive design and tumbled over into some weird realm that was almost video art. But it wasn't video.

Unfortunately, BLAM! is practically marooned on the CD-ROM. The disks cannot be put online for technological reasons. You can use the navigation links at the bottom of this page to explore some video grabs on YouTube. But these really fail to translate the impact of the disks as a whole. It sucks. BLAM! was built to convey an interactive experience that the web cannot deliver.

For years we have been meaning to put out an art book to document the glory and scandal that was Necro Enema Amalgamated. We'll get to it eventually so prepare yourselves now. It will rewrite the short history of digital art.

The first BLAM! disk premiered at MacWorld in 1993. "BLAM! attaches itself to you in the guise of a CD-ROM magazine," noted Wired, "but once purchased devolves into an assault on the consumer."

The second BLAM! CD-ROM was released in 1995. Whereas the first CD had pretensions to being a digital zine, the second abandoned that premise and became what it truly was: art. Wired reviewed this disk too: "BLAM!2 — a CD-ROM that's a cross between a guerrilla art project and an online zine — is so seductive, colorful, and goddamned loud it all but obliterates the original BLAM! disc."

A few favorite contributors (namely Rita Ackermann and Richard Kern) remained, but mostly BLAM! 2 veered toward the expressionist. It was like a German woodcut on CD-ROM. Highlights included Do-It-Yourself Gynecology (illustrated, of course), I Love My Pets But I Hate You, and W.A.R.: A Wook At Wacism, a "graphical exploration of the grassroots propaganda of America's most feared rhetorician, Tom Metzger, leader of the White Aryan Resistance."

Subtitled "An Autobiographical Index to Social Evils," the third BLAM! disk was released in 1997. The pièce de résistance, the culmination, the masterpiece, the "final fucking one," BLAM! 3 won a prestigious Silver Award from ID Magazine and took top prize at the Berlin Videonale.

Contents? There were no more outside contributors. BLAM! 3 was pure Necro Enema Amalgamated — aggressive, obscene, fucked up, and yet sometimes sweet and pretty too. The interface mutated as you progressed through the disk. The creators sometimes expressed their boredom with interactive design — "Click this pink piece of shit to proceed" — but then overcame that boredom by plunging into further extremes of perversion and hatred. Nigger Trigger, Tape Raper, Tit Man, Megiluguhguh, and the entire manuscript of Supervert's first book, Kreepy — it was a nightmare, a carnival, a bacchanale, a mindfuck, a death trip...