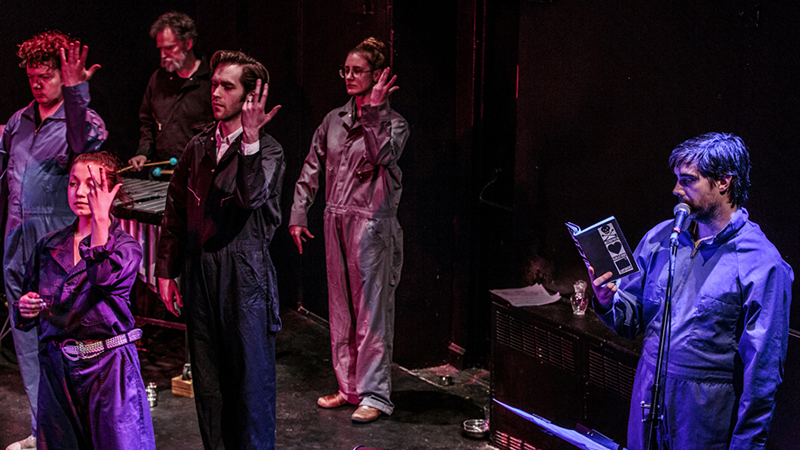 “Necrophilia Variations is, at its core, a study on modern humanity, our self-imposed boundaries, what keeps us from pushing beyond them and, most importantly, what provokes us into throwing them aside.” — Dark Markets

"This beautifully-designed black-minimalist paperback collection of chapters by Supervert 32C Inc. is, upon a second and much more thorough reading, now definitely recommended by us. How could we have missed the abundance of Black Humor in this imaginative outpouring of pure bile? We laughed dozens of times, at least. A book to fend off the darkest, dourest, most insomniac Night Thoughts..."

"The most awesome thing about not being able to put Necrophilia Variations down is the fact that nobody on the subway wants to sit next to you if they read the cover."

"Necrophilia Variations is, at its core, a study on modern humanity, our self-imposed boundaries, what keeps us from pushing beyond them and, most importantly, what provokes us into throwing them aside... Every once in a while, I find a book that affects me so greatly that it lingers long after it's been devoured and placed back on the shelf. I have a feeling that SUPERVERT's collection will be with me forever, worming its way deeper and deeper into my brain until its presence is untraceable."

"The further into the book I delved, the stronger its hold grew. Part of this can be ascribed to Supervert’s focus on the second word in the title. Necrophilia Variations is a series of philosophical meditations; it is a dark thought experiment -- challenging, grotesque and disturbing, and, while it casts its spell, compelling."

"This witty volume is nothing but a speculative and imaginative (I want to hope these are not real life experiences!) collection of short stories revolving around the concept of Necrophilia. The theme may seem macabre and ultimately monotonous, but the many different genres and situations make the narration a true little gem of perverted fun: some tales are in the form a diary, others are truly comical, many are dreams or daydreams, all are entertaining."

"Finally! A book that I consider eros and thanatos. All the books recommended to me as being eros and thanatos were all thanatos and no eros. Or the eros was so bizarre that I had no chance of relating to it. I am thrilled to finally read a book that contains both to equal degrees... You pick up a book that is called Necrophilia Variations, and it is safe to assume all the stories are going to be about having sex with the dead. But Necrophilia Variations, while it does include tales of sex with dead people, is more a collection of stories of people dealing with the confluence between sex and death... This really is intellectual eros and thanatos, not grotesque splatter for those who like lots of excessive violence with their sex... there is a lot of beauty, emotion and depth to these short stories. Overall, this is an excellent collection."

Magdalene Sullivan, A Sit-Down with Supervert

"To Supervert, the completion of Necrophilia Variations was akin to excising a tumor, leaving a gap to be filled with more ideas. Writing is something of an expulsion to him, a clearing of the mind, one that seems almost necessary — but to his readers, it is far from unwelcome. Supervert's creations are thought-provoking, validating, and sometimes, very touching. His explorations of stones once better left unturned has garnered great praise, and is certain to attract more."

"I know what you're thinking: 'That's disgusting.' And yes, this is not a book for the squeamish. But if you're looking for a truly different read, full of thoughts you've never even let yourself think before, you owe it to yourself to check out this collection of short stories and meditations. Told with surprising virtuosity in an almost maniacal range of voices, these stories explore more manifestations of the eros for thanatos than the Psychopathica Sexualis could hope to catalogue. Instead of keeping these disturbing urges at a comfortable distance, Supervert forces the reader to contemplate the nearness and familiarity, the recognizable and sometimes universal experiences that drive his characters to explore their repugnant desires."

"These books are fucking sexy. They're beautiful little fetish objects. I spent my first twenty minutes with them just running my fingers over the covers, enjoying the textures, admiring the images, psychotic restraint in design, perfect use of blank space, the deceptive simplicity of it all."

Eugène Satyrisci, From This There Is No Escape

"In the concluding variation the author addresses his reader directly. I'm not sure it works, or works the way the author may have intended -- at least it didn't with me. Did the Necrophilia Variations disgust me? At a very few of the most extreme fantasies I must admit to the occasional twinge; but these are, after all, fantasies, and I found the overall literary quality to be high. So perhaps this last chapter is a genuine self-reflection, one that is also pointed genuinely at the reader, akin to a shaman pointing a bone and cursing his audience."

"NV is a collection of short, awfully beautiful stories by Supervert. It is not a book about gory sex nor it is a cheap shot at zombie erotica. The stories in the book are tasteful little things that revolve around death, love and in some cases wink at necrophilia (in traditional terms, as in sex with the dead). I often found myself giggling whilst reading. Just to say that you won't find grotesque deciptions of sex acts with the dead nor the screenplay of August Underground... The book's production quality is just amazing -- the cover/jacket -- design is just great. Even the paper it is printed on feels better than what I am used to (damn you reference books). You also get a pretty cool bookmark. I almost see those items as bonuses to the book."

"The little black gem came wrapped in crisp cardboard with a note/bookmark that introduces the reader to who (or what) Supervert is and does... Supervert is able to slip in the POV of so many different minds and consciences, ranging from the naive and mundane to the depraved and supernatural. No doubt his work at Pervscan ,where he hand-picked and provided brilliant commentary to some of the intriguing aspects of human behavior in the news, has made him more proficient in the deviant mind than most authors could or would ever want to be... Speaking of the naive and depraved 'Suicide by strumpet' sent me in a myriad of cold sweats... I've been that fucking guy."

"On the many hours spent sitting in airports, trains and airplanes, I was entertained by a creative, fun, and decidedly un-morbid book by Supervert, Necrophilia Variations. Inside its covers lie short stories of fiction, mostly thought experiments probing into the consciousness of the necrophiliac. From exhumations, to murders, and of course, sexual intercourse with bodies in various stages of decomposition, it is more about cadaver pornography than it is corpse erotica."

"What is so special about these books [NV & ETSF] is the books, themselves. They are so beautiful, so fucking sexy just to look at, you will want to fuck them..."

"Houellebecq would be jealous."

"I am in love with this book! I cannot comprehend how much I love this inanimate object. Maybe it is a form of necrophilia itself, loving a book made out of dead leaves and pulp."

"Stumbling onto Necrophilia Variations was the best thing that could happen to my urge to know what goes on in a person’s mind when they steer away from the conventional."

Reviews of Necrophilia Variations on GoodReads