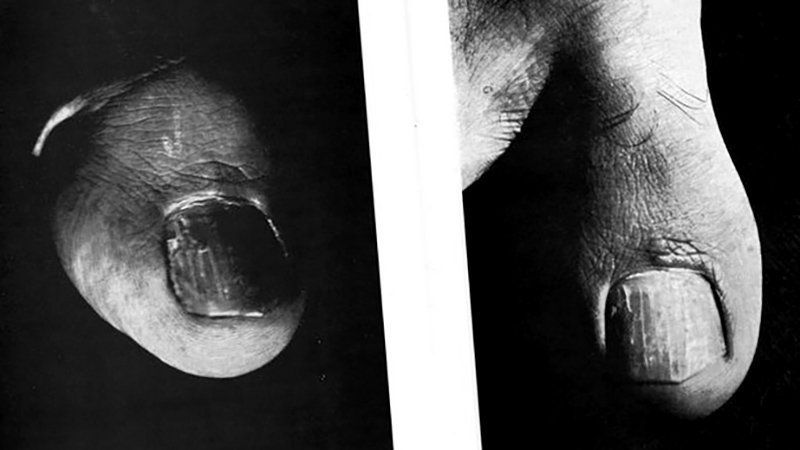 The big toe is the most human part of the human body, in the sense that no other element of this body is as differentiated from the corresponding element of the anthropoid ape (chimpanzee, gorilla, orangutan, or gibbon). This is due to the fact that the ape is tree dwelling, whereas man moves on the earth without clinging to branches, having himself become a tree, in other words raising himself straight up in the air like a tree, and all the more beautiful for the correctness of his erection. In addition, the function of the human foot consists in giving a firm foundation to the erection of which man is so proud (the big toe, ceasing to grasp branches, is applied to the ground on the same plane as the other toes).

But whatever the role played in the erection by his foot, man, who has a light head, in other words a head raised to the heavens and heavenly things, sees it as spit, on the pretext that he has this foot in the mud.

Although within the body blood flows in equal quantities from high to low and from low to high, there is a bias in favor of that which elevates itself, and human life is erroneously seen as an elevation. The division of the universe into subterranean hell and perfectly pure heaven is an indelible conception, mud and darkness being the principles of evil as light and celestial space are the principles of good: with their feet in mud but their heads more or less in light, men obstinately imagine a tide that will permanently elevate them, never to return, into pure space. Human life entails, in fact, the rage of seeing oneself as a back and forth movement from refuse to the ideal, and from the ideal to refuse -- a rage that is easily directed against an organ as base as the foot.

The human foot is commonly subjected to grotesque tortures that deform it and make it rickety. In an imbecilic way it is doomed to corns, calluses, and bunions, and if one takes into account turns of phrase that are only now disappearing, to the most nauseating filthiness: the pleasant expression "her hands are as dirty as feet," while no longer true of the entire human collectivity, was so in the seventeenth century.

Man's secret horror of his foot is one of the explanations for the tendency to conceal its length and form as much as possible. Heels of greater or lesser height, depending on the sex, distract from the foot's low and flat character.

Besides, this uneasiness is often confused with a sexual uneasiness; this is especially striking among the Chinese, who, after having atrophied the feet of women, situate them at the most excessive point of deviance. The husband himself must not see the nude feet of his wife, and it is incorrect and immortal in general to look at the feet of women. Catholic confessors, adapting themselves to this aberration, ask their Chinese penitents "if they have not looked at women's feet."

The same aberration is found among the Turks (Volga Turks, Turks of Central Asia), who consider it immoral to show their nude feet and who even go to bed in stockings.

Nothing similar can be cited from classical antiquity (apart from the use of very high soles in tragedies). The most prudish Roman matrons constantly allowed their nude toes to be seen. On the other hand, modesty concerning the feet developed excessively in the modern era and only started to disappear in the nineteenth century. M. Salomon Reinach has studied this development in detail in the article entitled "Pieds pudiques" ["Modest Feet"]1, insisting on the role of Spain, where women's feet have been the object of the most dreaded anxiety and thus were the cause of crimes. The simple fact of allowing the shod foot to be seen, jutting out from under a skirt, was regarded as indecent. Under no circumstances was it possible to touch the foot of a woman, this liberty being, with one exception, more grave than any other. Of course, the foot of the queen was the object of the most terrifying prohibition. Thus, according to Mme D'Aulnoy, the Count of Villamediana, in love with Queen Elizabeth, had the idea of starting a fire in order to have the pleasure of carrying her in his arms: "Almost the entire house, worth 100,000 écus, was burned, but he was consoled by the fact that, taking advantage of so favorable an occasion, he took the sovereign in his arms and carried her into a small staircase. He took some liberties there, and, something very much noticed in this country, he even touched her foot. A little page saw it, reported it to the king, and the latter had his revenge by killing the count with a pistol shot."

It is possible to see in these obsessions , as M. Reinach does, a progressive refinement of modesty that little by little has been able to reach the calf, the ankle, and the foot. This explanation, in part well founded, is however not sufficient if one wants to account for the hilarity commonly produced by simply imagining the toes. The play of fantasies and fears, of human necessities and aberrations, is in fact such that fingers have come to signify useful action and firm character, the toes stupor and base idiocy. The vicissitudes of organs, the profusion of stomachs, larynxes, and brains traversing innumerable animal species and individuals, carries the imagination along in an ebb and flow it does not willingly follow, due to a hatred of the still painfully perceptible frenzy of the bloody palpitations of the body. Man willingly imagines himself to be like the god Neptune, stilling his own waves, with majesty; nevertheless, the bellowing waves of the viscera, in more or less incessant inflation and upheaval, brusely put an end to his dignity. Blind, but tranquil and strangely despising his obscure baseness, a given person, ready to call to mind the grandeurs of human history, as when his glance ascends a monument testifying to the grandeur of his nation, is stopped in mid-fight by an atrocious pain in his big toe because, though the most noble of animals, he nevertheless has corns on his feet; in other words, he has feet, and these feet independently lead an ignoble life.

Corns on the feet differ from headaches and toothaches by their baseness, and they are only laughable because of an ignominy explicable by the mud in which feet are found. Since by its physical attitude the human race distances itself as much as it can from terrestrial mud -- whereas a spasmodic laugh carries joy to its summit each time its purest flight lands man's own arrogance spread-eagle in the mud -- one can imagine that a toe, always more or less damaged and humiliating, is psychologically analogous to the brutal fall of a man -- in other words, to death. The hideously cadaverous and at the same time loud and proud appearance of the big toe corresponds to this derision and gives a very shrill expression to the disorder of the human body, that production of the violent discord of the organs.

The form of the big toe is not, however, specifically monstrous: in this it is different from other parts of the body, the inside of a gaping mouth, for example. Only secondary (but common) deformations have been able to give its ignominy an exceptionally burlesque value. Now it is easy, most often, to account for burlesque values by means of extreme seductiveness. But we are led here to distinguish categorically two radically opposed kinds of seductiveness (whose habituation confusion entails the most absurd misunderstandings of language).

If a seductive element is to be attributed to the big toe, it is evidently not one to satisfy such exalted aspirations as, for example, the perfectly indelible taste that, in most cases, leads one to prefer elegant and correct forms. On the contrary, if one chooses, for example, the case of the Count of Villamediana, one can affirm that the pleasure he derived from touching the queen's foot specifically derived from the ugliness and infection represented by the baseness of the foot, in practice by the most deformed feet. Thus, supposing that the queen's foot was perfectly pretty, it still derived its sacrilegious charm from deformed and muddy feet. Since a queen is a priori a more ideal and ethereal being than any other, it was human to the point of laceration to touch what in fact was not very different from the stinking foot of a thug. Here one submits to a seduction radically opposed to that caused by light and ideal beauty; the two orders of seduction are often confused because a person constantly moves from one to the other, and, given this back and forth movement, whether it finds its end in one direction or the other, seduction is all the more acute when the movement is more brutal.

As for the big toe, classic foot fetishism leading to the licking of toes categorically indicates that it is a phenomenon of base seduction, which accounts for the burlesque value that is always more or less attached to the pleasures condemned by pure and superficial men.

The meaning of this article lies in its insistence on a direct and explicit questioning of seductiveness, without taking into account poetic concoctions that are, ultimately, nothing but a diversion (most human beings are naturally feeble and can only abandon themselves to their instincts when in a poetic haze). A return to reality does not imply any new acceptances, but means that one is seduced in a base manner, without transpositions and to the point of screaming, opening his eyes wide: opening them wide, then, before a big toe.