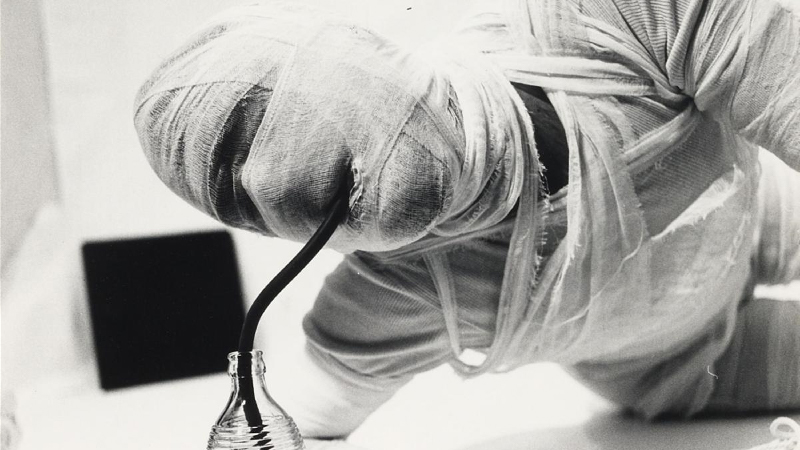 Rudolf Schwarzkogler (1940-1969) had a brief but brilliant career in art before either falling or jumping to his death from a window. An integral part of the group of Viennese performance artists consisting of Hermann Nitsch, Günter Brus, and Otto Muehl, Schwarzkogler shared their themes — pain, self-mutilation, guilt and exorcism — but differed in the control and aesthetic precision of his work. Whereas their deliberately provocative performances resembled pagan orgies, Schwarzkogler — influenced more by philosophy, Indian mysticism, Malevich and Suprematism (note the black square in the aktions) — performed all but one of his aktions in private, carefully staging series of tableaux to be captured by still photographs.

Note: The texts of these unperformed aktions have been drawn from the authoritative work on Rudolf Schwarzkogler by Eva Badura-Triska, Rudolf Schwarzkogler: Leben Und Werk, Klagenfurt: Ritter Verlag, 1992. The numbering of the texts follow this work. Translations by Supervert 32C Inc.

This is the only book currently in print featuring work by Schwarzkogler. Fortunately, it's comprehensive and includes almost all of Schwarzkogler's theoretical writings, scores for aktions, etc — a genuine must-have. (Eva Badura-Triska's Rudolf Schwarzkogler: Leben und Werk, the definitive and profusely illustrated book on the artist, can usually be found used at abebooks.com.)

This is now the definitive reference work on Vienna Actionism. It contains 1,400 color images, biographies and an illustrated chronology and index of all the "actions," literature and films created by Günter Brus, Otto Mühl, Hermann Nitsch and Rudolf Schwarzkogler.

Published to accompany a New York exhibition, this book looks at the way in which Viennese Actionism evolved out of earlier movements such as Abstract Expressionism and Art Informel.

Stephen Barber, The Art Of Destruction: The Films Of The Vienna Action Group (Persistence of Vision)

The Vienna Action Group formed the most provocative, insurgent, and challenging of all the worldwide art movements of the 1960s. Their sexually charged and antisocial actions exacted a profound and irreparable upheaval in the way in which art was conceived. Using their own bodies as raw material, the Action Group undertook experiments in cruelty that disassembled the human body and its acts into compacted gestures of blood, semen, and meat. The films of the Vienna Action Group form the essential residue, debris, and evidence of their performances. For the first time, this book focuses on those films as fully revealing the obsessions, ambitions, and outrages of the Action Group. Fully illustrated and annotated, this is a book of compelling interest to all students of film, art, and performance, and for all readers engaged with questioning social and corporate cultures.