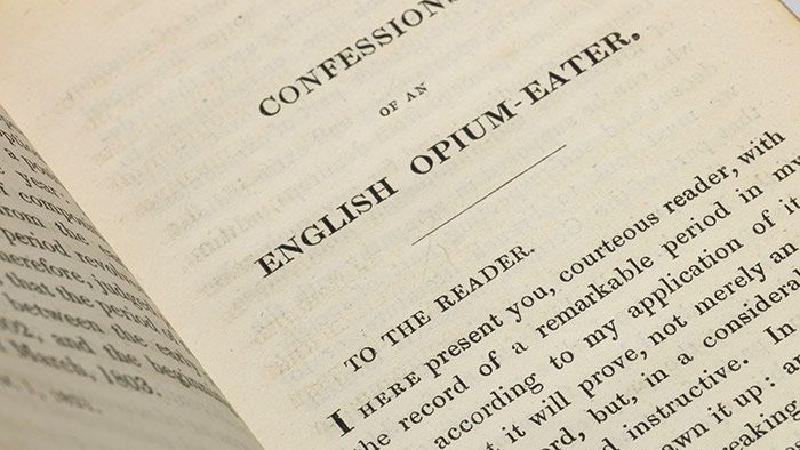 It is a shame that Thomas De Quincey (1785-1859) is known today primarily as the author of Confessions of an English Opium Eater. Though the book was plagiarized by Baudelaire and canonized by the drug writers of modernity (Cocteau, Burroughs, etc), it doesn't amount to much more than a literary version of trash television, with De Quincey describing the decadent delights of addiction.

There is another De Quincey — a less well-known writer of subtle, satirical, and often subversive intelligence. It was no doubt this writer who gained the admiration of Coleridge and Wordsworth (who became good friends of De Quincey), and later of Jorge Luis Borges, who frequently cites De Quincey in his tours de force of perverse logic. "For many years," Borges wrote, "I thought that the almost infinite world of literature was in one man." With his love for paradox, Borges then cites several men, the last of which is De Quincey.

A child prodigy, a teen runaway who lived with a prostitute, a drug fiend for more than half his life, De Quincey eventually married, squandered his capital, sired eight children, and turned to journalism (of all things) to eke out an existence. He wrote few "major works," but his penetrating mind, black humor, and aristocratic style — he writes like a British butler telling you bad news — raised some of his copious journalism above its station.

De Quincey, On Murder Considered as One of the Fine Arts

On Murder Considered as One of the Fine Arts (1827) is probably De Quincey's lone masterpiece, a work of black humor and perverse reasoning.

What is literature? In this brilliant excerpt from a longer essay about Alexander Pope (published in 1848), De Quincey asserts that literature is essentially power, while other forms of writing are merely knowledge.

The best place to buy De Quincey is at your local used bookstore, but if you really want to pick up a copy of the Opium Eater, this Oxford edition is probably the best. It also contains De Quincey's highly regarded text Suspiria de Profundis and a few essays.

Edited with scholarly exactitude to correct the errors of earlier editions, this is the first new edition of De Quincey's collected works in over a century.

De Quincey, Klosterheim, Or, The Masque

Klosterheim — a Gothic tale complete with a labyrinthine castle, somber woods, a masked ball, murder, a young and innocent countess — was admired by Coleridge for its "purity of language and style."