Analysis of the role of bestiality (sex with animals) in contemporary art, particularly in two mechanized works by Paul McCarthy and Mat Collishaw. Originally published in BLAM! 3 (January 1998). 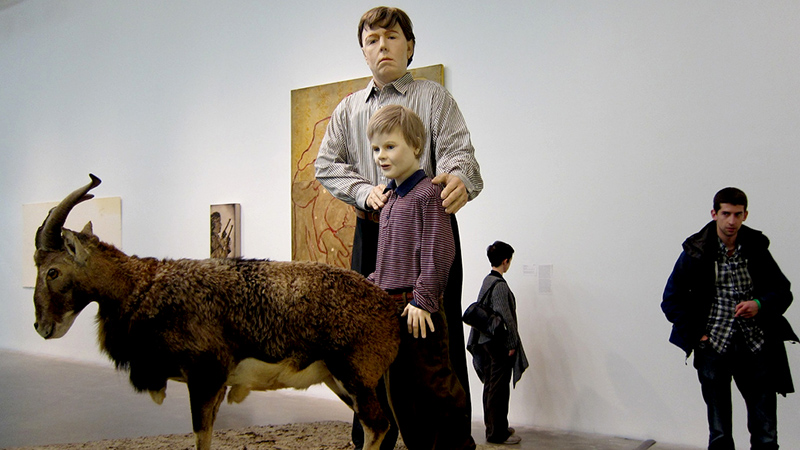 Is animal sex reactionary? Two recent artworks depicting bestiality suggest that there's something anachronistic, something unfashionable about interspecific intercourse. A 1992 sculpture by Mat Collishaw appropriates an infamous turn-of-the-century porn image of a zebra mounting a woman from behind; the image is blown up to the size of a stage flat and the lower half of the zebra attached to a small motor in order to give it a humping motion. The title of the work, In the Old Fashioned Way, implies that people — well, people just don't fuck zebras like they used to. In another bestial work, a sculpture by Paul McCarthy entitled Cultural Gothic, a father decked out in Brooks Brothers attire introduces his preppy son to the fine art of buggering a goat. This 1992-93 sculpture is also mechanized; at various intervals, an air compressor and pneumatic cylinder cause the son's pelvis to thrust at the animal, while the father turns his head and rests his hands in tacit approval on the boy's shoulders. Though obviously parodying Grant Wood's American Gothic, the title captures the irony of contrasts in the work: the bourgeois demeanor of the figures evinces their "culture," while the bestial nature of their activity suggests that they are engaged in something extremely primitive, "gothic" as though American Gothic implied that being down on the farm meant getting down with the animals.

The image of the farmer doing his animals is the very stereotype of bestiality. In his Studies in the Psychology of Sex, Havelock Ellis claims that this is primarily because farmers are incredibly familiar with their livestock and have "primitive conceptions of life" which don't greatly differentiate between men and beasts — between human and inhuman desiderata.1 Bestiality, in this sense, is merely the negative reflection of a question that used quite commonly to plague philosophers: What is human? What does separate man from animal? In the 17th century, for instance, Descartes argued in the Discourse on Method that it is speech and rationality which distinguish man from beast. Later, in the 19th century, Darwin held that man was merely the most complicated or "advanced" being in a continuous chain of evolution — the culmination of a series whose first term was the amoeba and penultimate the ape.

Today, however, man seems to consider himself not as the furthest degree in a continuous series, but rather as different in kind than the animal — as though man and animal evolve in parallel but decidedly separate series. The question of animal rights seems to refer less to the creatures' anteriority to humans in a single series than to the notion that in their own series they're reaching a level of humanity: Bambi, not a relative or ancestor of man's, but a deer that talks and thinks. It does not belong to our series, but resides at a comparable state of evolution in its own. Animals used to have a use value — meat, fur, ivory, plow the field and carry the soldiers — but now, when shrink-wrapping displays the meat but obscures its origin, every animal is essentially the pet. We are not to exploit these peers of ours, but to coexist with them. After all, did not such eminent researchers as John Lilly discover that dolphins and other animals have communicative abilities? The criteria of Descartes wouldn't even differentiate us anymore.

In this light, perhaps bestiality really is reactionary, out-of-date, old-hat. Both In the Old Fashioned Way and Cultural Gothic, with their motorized humping, literally reduce animal sex to its mechanical simulation, as if to point up the fact that the forward march of technology has advanced over even the most bestial of activities. This is especially ironic given that contemporary technology has enabled scientists to produce any number of biological "monsters" or half-breeds by means of genetic manipulation. Experiments in this realm have already sown the seeds for entirely new industries such as "pharming," in which livestock are endowed with human genes in order to produce commercial drugs that can be extracted from their blood or milk. What is this if not another kind — alongside the love of pets — of non-erotic bestiality? The taboo against zoophilia is simply not a proscription against the production of hybrids or monsters: in the early part of the century experiments in enhancing men's virility by giving them transplants of animal sex characteristics (see Serge Voronoff's Testicular Grafting from Ape to Man, 1933) even resulted in a surgical vogue until, a few years later, the unhappy participants discovered the concept of organ-donor incompatibility.

The taboo against zoophilia thus does not genuinely concern itself with what animal sex can produce, but with its inability to reproduce. Traditional proscriptions against most forms of sex derive from the fear of wasting seed, and bestial couplings are necessarily sterile: not only, contrary to myth, does nature furnish a number of biological mechanisms which prevent foreign sperms from fertilizing native eggs, but oftentimes the animal is used in ways that don't even make cross-breeding a threat. It has been said that bestiality should even be called interspecific rape, since the animals rarely initiate contact. The goat in Cultural Gothic tolerates without soliciting the encounter, while the zebra in In the Old Fashioned Way could possibly be the aggressor, although the woman's hold on the legs of the zebra imply her complicity (and of course the original pornographic drawing was probably made by a man, who portrayed her with this complicity). If man expresses the animal in himself in fucking — Wilhelm Reich justly says that when a man orgasms, he's a jellyfish, when he represses himself, a worm — he expresses the man in himself by choosing or forcing himself on a creature of another species.2 This is a true rarity in the animal kingdom: Reich also mentions that it is not reason or language, in his view, but sadism that "is the only important trait differentiating man's structure from that of the animal."3 Perhaps we used to deny this sadism by imputing use value to the animal, as though it asked for everything we did to it. But today, if animals no longer seem to have innate use value, machines still do, and this may be why mechanophilia is less disturbing than bestiality: you never have to get consent from a machine.

Animal sex is probably second only to religion as a well-spring for images in the history of art.4 Though in practice proscribed by laws extending further back than the Bible, in art bestiality seems less taboo than regular old coitus: Leda and the Swan, Beauty and the Beast, the Rape of Ganymede, Pasiphae, the Minotaur, Centaurs raping women, Satyrs "surprising" nymphs, Zeus disguising himself as a bull to rape Demeter and Europa, as a serpent to seduce Persephone, as an eagle for Aegina, a pigeon for Pythia, a stallion for Dia — these themes may be largely mythological, but they certainly are not confined to Greek vases or Renaissance paintings. Cézanne, for instance, painted a fine version of the Leda story, and Picasso's self-identification with the Minotaur resulted in countless pictures of bulls copulating with women. In contrast, the works by Collishaw and McCarthy differ from this long tradition in that they do not seize upon mythological pretexts for depicting bestiality: they no longer clothe animal sex in myths, but rather cloak machines in animal sex. If McCarthy's sculpture suggests that the pleasures of bestiality will be lost unless transmitted from father to son, it is only because in the future sex may well be highly mechanical.

2. "In the animal, man, there still functions a worm.... One still frequently meets the concept that man–in spite of his development from phylogenetically older forms–represents a living being of a new kind, without connection with the forms from which he stems. In the segments of the spine and ganglia, the segmental character, and with that, the worm character of the biological system is clearly expressed." Or again: "the expressive movements in the orgasm reflex are functionally identical with those of a living and swimming jellyfish." Wilhelm Reich, Character Analysis (NY: Orgone Institute Press, 1949), pp395-6.