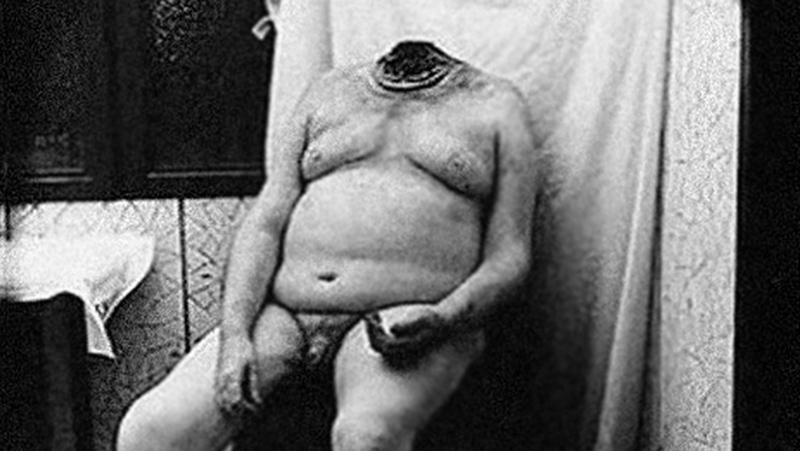 When Joel-Peter Witkin takes a photograph of a headless corpse (its neck terminating in a meaty stump, its penis shriveling into its fat stomach, its feet absurdly sporting black socks), does it repel you? Is death repulsive? We know that people who develop a familiarity with death (undertakers, soldiers, etc.) can eat in the same room as a corpse and digest as happily as ever. It is illogical to say that death is intrinsically able to repel; rather, we come to repel it, to hide it away in hospitals, to say No to death (in the 1950s,the English sociologist Geoffrey Gorer claimed that death had become the new pornography, replacing sex as society's greatest taboo). So is it possible for Witkin's photograph, Man Without a Head, 1993, to repel you? Or does it simply put you in the uncomfortable position of having to say a Yes or a No? Witkin has long specialized in subjects to which society tends to say a resounding No: not just corpses, but sexual pariahs, circus freaks, and "physical prodigies of all kinds," as he once put it. The generally necrotic b/w photographs in this new show employ the same elements that Witkin has combined and recombined for years: abundant art historical references, manipulated negatives and prints, Baroque staging and lighting, etc. But what is the function of these elements? Is it possible to reconcile the formal sophistication — and beauty — of Witkin's photography with its "repulsive" subjects? In Still Life, Mexico, 1992, a crisp white tablecloth emerges from a black background to proffer fruit, a fish, a roll, and a human leg (severed just below the knee). Though horrible, stringy, meaty stuff gushes out the top of the leg, and a cut on its side reveals globules of what looks like caviar, it's a perfectly elegant still life — very deliberate, technically perfect, and utterly unsensationalistic. Even if you want to say No to the subject matter, its rendering is so beautiful that you just might say Yes.

Why would you want to say Yes to death, dismemberment, or any of the other staples in Witkin's banquet of the bizarre? It's sort of like an extreme form of multiculturalism, a respect for that which is drastically foreign to you, even terrifying. In John Herring, Person with AIDS, Posed as Flora with Lover and Mother, 1992, modeled after Rembrandt's portrait of his wife Saskia as Flora, the subject stands on a fake little cloud, a nipple poking out of his elaborate bodice, his lover and mother sitting off to his left. No doubt this photograph is a radical departure from the representational modes at either end of the debate about how PWA's should be depicted (i.e. in works that chronicle the debilitating effects of AIDS, a la Nicholas Nixon, or in works that depict PWA's as living active, "normal" lives). Aren't both these modes problematic, though, in that the former reduces the person to the disease, while the latter denies the disease altogether? Whereas one mode says No to the person, the other to the illness, Witkin positions himself as the husband (Rembrandt: Saskia = Witkin: Herring), as he who loves and cherishes regardless of sickness or health. He often claims (as in a recent Vanity Fair article) to see himself as "loving the unloved, the damaged, the outcasts," and such unconditional acceptance characterizes his work in general: like St Francis of Assisi, who drank the pus of lepers in order to overcome his repulsion of them, Witkin is not a rubbernecker, an exploiter, or a pessimist, but one who says Yes to everything questionable, even to the terrible.