Matthew Barney and Beyond

Supervert's analysis of the work of Matthew Barney in terms of power, askesis, impedance, force, and sliminess. Originally published in Parkett Magazine (December 1995). 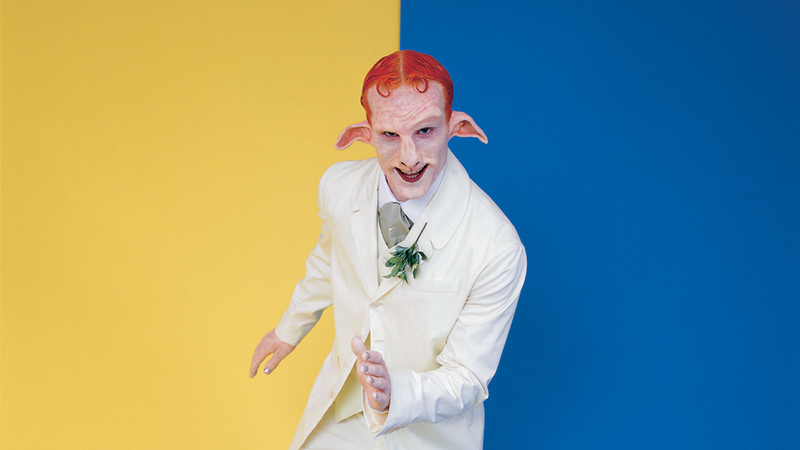 Henri Bergson once said of philosophy that it should be an effort to go beyond the human state.1 In art, there is an essentially Romantic ethos, rooted in the early 19th century, which holds that it's not so much an effort to go beyond as a struggle to come back — from madness, poverty, drugs, perversion. In the work of Matthew Barney, however, any attempt to supersede the human state takes an entirely different form: it's not through bohemianism that the artist strives for some beyond, but through athleticism. Madness becomes fanaticism, poverty takes the form of a pre-game regimen, opiates yield to endorphins, and perversion figures into a greater logic of abnormal development that includes "enhanced" performance and bodily hypertrophy. If, like Dante's inferno, the beyond is split into different levels, there probably is a realm for the fucked-up, but there may well be another for the bulked-up — and Matthew Barney intends to inhabit it first.

To say that Barney practices a sort of aesthetic athleticism or athletic aestheticism or whatever is not merely to underscore the sports iconography that permeates his work, from the early obsession with Jim Otto (the longtime Oakland Raiders center legendary for his ability to play despite grave injury) to the Tourist Trophy sidecar racers in the recent CREMASTER 4. It is a matter instead of recognizing the multifarious ways in which Barney literally uses athletic means for aesthetic ends. In the DRAWING RESTRAINT series (1989-1993), Barney devised a number of situations which did for drawing what the wearing of ankle weights does for jogging: increase its strenuousness. These "facilities to defeat the facility of drawing," as Barney called them, necessitated that the artist pounce on a trampoline, climb ramps while straining at the end of tethers, and push blocking sleds (used to develop line skills in football training) simply in order to draw. "I was interested in hypertrophy," Barney has said, "how a form can grow productively under a self-imposed resistance, so I wore a restraining device to make drawings. They were linked to my interest in how a muscle can grow under the resistance of a weight."2 The idea of making it any harder to produce an artwork may well seem crazy, since oftentimes artists lead such difficult lives that we marvel at their ability to produce anything at all, but the DRAWING RESTRAINTS propose that the strength of a work lies in inverse proportion to the hardships overcome to create it. By this logic, Van Gogh might have atrophied in the zero gravity of success; his work might have been able to increase in power only to the precise extent that it surmounted his asceticism, poverty, and insanity.3 Asceticism hereby reacquires a value it once had for the ancient Greeks, to whom the word askesis meant not suppressing sensual life in the manner of monks but training and conditioning in the manner of Olympic competitors. Nietzsche: "I also want to make asceticism natural again: in place of the aim of denial, the aim of strengthening."4 And just as the strong man — the Übermensch — inhabited the beyond of Nietzsche's philosophy, so too may Barney have an ideal type in mind for his circle of hell: the Überkünstler.

Is it right to compare Van Gogh's misery to a series of controlled, planned experiments by an artist in whose biography the key words — Yalie, model, art star — bespeak not hardship but privilege? Does Barney cultivate cult of personality? Certainly some of Barney's own interests (Houdini, Jim Otto) seem cultish, and the very heterogeneity of the iconographical system into which they're inserted — elements include satyrs, weird medical gadgetry, high-tech synthetic materials, wandering orifices, tapioca, athletic paraphernalia — makes it tempting to read the whole through the artist himself, as though he were the mastermind behind some sort of complicated plot. However, biographical analysis of this type frequently says more about the exegete than the exegeted, since inevitably you learn less about people by licking their boots than by looking them in the eye — and if you look Barney straight in the face, you can't fail to recognize a severe expression of anti-idolatry. Compare his oeuvre to an art of which, in certain respects, it's not unreminiscent: state-sanctioned Nazi art of the 1930s. Both share a predilection for mythography, technical slickness, cultification, "physical culture." In the paintings of Nazi artists such as Adolf Ziegler, all of this served to heroicize Fascist ideology, whereas in Barney's work it's plainly idiosyncratic, sort of perverted even — not for heroes but for zeroes, the 00 of Jim Otto's football jersey. Personality here is not enculted but (pardon my French) enculé: it's highly unlikely Otto feels flattered much less heroicized by Barney's paeans, wherein he's not a glorious Hall of Famer rendered in colors glorious and true, but the bearer of a "twin rectum."

This anti-idolatry in Barney's work is the expression of a force complementary to that one which grows, increases, and accumulates in power: it is that which liquefies, melts, disintegrates — that which corrodes idols. Barney's videos and sculptures are traversed by a tremendous wave of deliquescence embodied by the icky, slimy, and sticky. Barbells made of frozen petroleum jelly threaten not only to melt but to dissolve anyone who comes in contact with them. Sartre: "These long, soft strings of substance which fall from me to the slimy body (when, for example, I plunge my hand into it and then pull it out again) symbolize a rolling off of myself in the slime... To touch the slimy is to risk being dissolved in sliminess."5 This deliquescence is the natural counterpart of Barney's askesis. If muscles strengthen against resistance, then resistance melts in the face of increased strength. In the early DRAWING RESTRAINTS there might have been an unrealized dream of this, of training to the point of overcoming resistance entirely. Is it not the wish of every muscle to become power pure and unimpeded? In CREMASTER 4, the Loughton Candidate dances a hole through the floor of a pier, drops into the sea, crawls through some god-awful slimy underworld, resurfaces on a beach, as though he had become a sheer force before which every kind of matter gives way.

Barney has said that "the word 'body' is somehow too limiting,"6 and it may well be because the entirety of his work points to a beyond comprised of a mad interplay of forces — the storage and expenditure of energy, motion and rest (the snap and the delay of game penalty), friction and slippage (tapioca and teflon), expansion and contraction (testicles), opening and closing (orifices), bursts and sudden reverses and cliffhanging arrests (the frenetic, pointless dash of the sidecar racers around the Isle of Man in CREMASTER 4). Like Artaud's Theater of Cruelty, Barney's work tends to "stage events, not men. Men will come in their turn with their psychology and their passions, but they will be taken as the emanation of certain forces."7 In DRAWING RESTRAINT 7, 1993, two satyrs wrestle for the honor of making a mark in the condensation collecting on the sunroof of a white limousine circulating through the bridges and tunnels of a seemingly ceaseless metropolis. Are these satyrs the emanation of certain forces? Barney has said that his interest in the creature derives partly from the fact "that 'Pan' is the root of 'panic.' It's because Pan leads you to Bacchus — he gives you the moment of unease before you let yourself go."8 The burst, the release, the rapid breakdown of inhibition — terms used to describe a force cracking through the hard shell of a socialized exoskeleton (the "self-overcoming" of the superman shattering the Super Ego). Satyriasis, or uncontrollable lust — the condition of a body given over entirely to a drive. In this final piece in the series, restraint no longer takes the form of a device brought to bear against the artist himself; it is now a struggle of force against force, acting and reacting in a state of perpetual motion — satyr contra satyr in the limo ride that never ends. It's less an epic narrative or mythological allegory than an expression of a law of thermodynamics: there are no heroes in Matthew Barney's work, no personalities, only vehicles and their driving forces.

3. Incidentally, Van Gogh often spoke of the need to grow stronger and harder. A doctor tells him he looks like a worker and he says, "This is just what I have tried to change in myself; when I was younger, I looked like one who was intellectually overwrought, and now I look like a bargee or an ironworker." See Mark Roskill, ed., The Letters of Vincent Van Gogh (New York: Atheneum, 1963), p. 252 and passim.