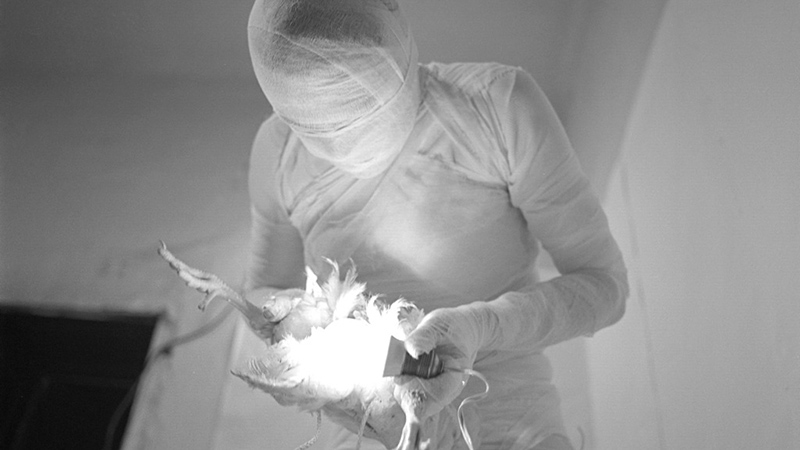 Everyone seems to know by now that Rudolf Schwarzkogler did not actually kill himself by cutting his penis off in slices during an Aktion, and yet you will read no text about the Austrian artist that does not relish in either reporting or debunking the castration myth. Perhaps this is because, while manifestly untrue (Schwarzkogler died in 1969 when he leapt or fell from a window), the myth nevertheless expresses in nuce certain truths about the products of his all too brief career. Not only does it condense the automutilative forces generally rampant in his work into a picture of the ultimate act of self-damage, but it portrays this act as the epitome of calm, cool execution: the myth has it not that Schwarzkogler lopped off his penis in some mad outburst of artistic frenzy, but rather that he sliced it off bit by deliberate bit.

As the photographs and texts in this show attest, it is precisely this deliberate quality that makes Schwarzkogler's work so chilling and beautiful. Unlike the messy, manic performances of the brilliant Paul McCarthy — with whom he's oddly paired for the purposes of this exhibition — and unlike the silly pseudodionysianism of his friend Hermann Nitsch's Orgies Mysteries Theater, where the big thing was to sacrifice animals and frolic naked in their blood and guts in some nutty pagan interpretation of Artaud's theater of cruelty, Schwarzkogler's actions seemed to proceed with maddeningly Apollinian reason and composure. In a series of photographs depicting Schwarzkogler's first action, Hochzeit (Wedding), 1965, the artist can be seen cutting open small fish, disemboweling them, stuffing pink flowers and injecting blue liquids into their splayed bellies (this performance, apparently the only one documented in color, captures Schwarzogler's schematic palette, especially the Yves Kleinesque blue that so fascinated him). Carried out methodically at a small table covered with tumblers of liquids, dead fish (lying neatly in rows), a hot plate, and an enigmatic roll of tape, this series of actions finally leads up to the marriage: the bride, one breast exposed, gown splashed with blue, stands against the wall as Schwarzkogler appears to place a little skull on top of her head. Instructions that Schwarzkogler wrote for his later performances, the ones that seem to depict a nightmare clinic where gauze-wrapped men are poked and prodded with razor blades and electrical wires, convey the elegant, sadomasochistic precision that infused his actions: "Head leaning on a lump of suet. Black liquid drips from the bandage above the eye onto the suet. A hand with black painted fingernails is lying on the head." The stunningly beautiful black and white photos that document these later performances don't seem to culminate in a climax of any sort, but rather simply enlarge the picture of a central atrocity. This is what is most disturbing about Schwarzkogler's work: for all of its Apollinian deliberateness, it seems to lead nowhere in particular, like a set of stairs in a dream. As perhaps embodied in the myth of Schwarzkogler's calculated self-castration, madness lay at the end of his method.