Supervert's description of the implicit cruelty that occurs when transposing classical art-making techniques to live subjects, as in the work of Vanessa Beecroft. Originally published in Parkett Magazine (November 1999). 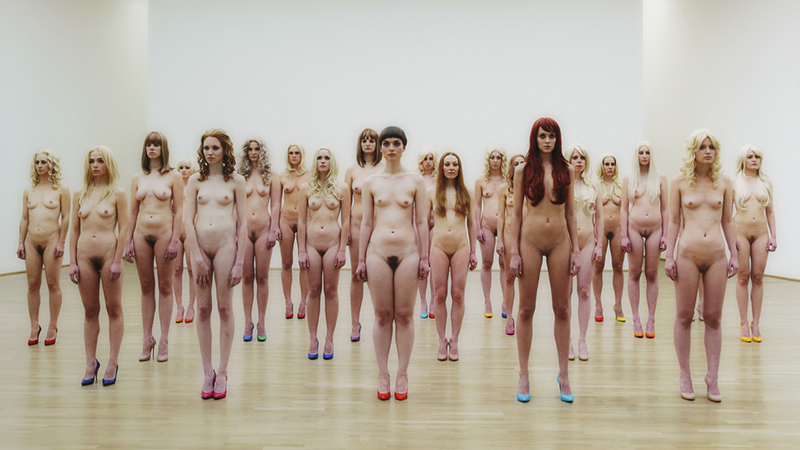 Everything changes when live humans are used as subjects. An innocent objective such as that found in a scientific experiment can become sinister and foreboding. No one quivers at the replication of plastic containers, Brillo Boxes, tadpoles, rats, or even sheep, but the prospect of cloning human beings is sufficiently disturbing to inspire international censure and prohibition. The same is true of art. Time-honored practices of artistic technique, were they applied to live human beings, would no longer be honored at all. For example, Renaissance artists developed drawing techniques — such as modeling the body according to geometric proportions and abstracting from the life model in order to create a timeless or "classic" figure — which are still taught to students today. But if these were translated into reality and applied to human beings, would these same techniques not seem downright malevolent? In a treatise on proportion, Albrecht Dürer recommended a common Renaissance practice: to compose a beautiful figure, he wrote, the artist "must take the head from some and the chest, arm, leg, hand, and foot from others." Substitute "blond hair" or "blue eyes" for any of the preceding body parts and one quickly approaches an Aryanism of aesthetics. "Negro faces are seldom beautiful," Dürer warned, adding that "their shinbones and knees" are "not so good to look upon as those of the whites."1 It is doubtful that Dürer the man was a particularly rabid racist. The lesson, rather, is that the classic itself is not only timeless but also eugenic.

The drama of Vanessa Beecroft’s work derives from a similar transposition. In inspiration her work is essentially classical. Nude and semi-nude females, shorn of any trappings that might express their individuality, contractually obliged to remain as silent and immobile as possible, posed vertically and arranged in a group composition on a horizontal plane — the sum effect is something like a painting by Poussin except for this one crucial difference: Beecroft’s subjects are not made of paint but of living flesh. To abstract from the life model in order to paint a timeless figure is one thing, but to abstract the life model herself is another. What appears as classicism in the first case becomes depersonalization and suppression of individuality in the second. The mathematical techniques of proportion utilized in the first case — the Golden Mean and the "rule of three" — become anorexia and girdles in the second. Fashion is used by Beecroft not to individuate but to homogenize, and even nudity is exploited not as an expression of sexuality but rather as a way of reducing the models to an appearance of sameness — nudity is, after all, the original uniform. An old art-historical distinction holds that romantic art is premised on the expression of the individual, whilst classic art suppresses the hand of the individual in favor of rationalism, formalism, and mathematical order.2 In the hands of Beecroft, however, classicism goes a step further: it is not only the individuality of the artist that is restrained, but the individuality of the subjects that is actively suppressed.

Whereas the classical artist gives order to his compositions, Beecroft gives orders to her models. Typically these are rudimentary, along the lines of (1) do not move; (2) do not talk; (3) do not interact with the audience. These rules serve the aesthetic function of uniting the girls as a group and therefore as a single image. However, simply because the models are human, this method leads into a gray area somewhere between ethics and aesthetics. When an artist controls a paintbrush, it’s called skill. But when an artist controls people, what is it called? Is it still just skill? Does it become manipulation? Certainly Beecroft is not a fascist tyrant. She does not go out into the street with cudgels in order to conscript fashionable girls into her exhibitions by force. At minimum, there is at least an implicit contract between the artist and her subjects: earlier works relied on volunteers, recent ones utilize models who are paid for their services. Nevertheless, in every work there remains a model of control which is pyramidal and essentially authoritarian. Beecroft frequently refers to her girls as an "army," thus implicitly positioning herself as commander or general. However, the entire emphasis of this pseudo-militarism is not on violence or bellicosity but on control. Her army of girls is not Amazonian, and her model "soldiers" hardly seem ready for combat. Instead, their militarism consists in homogeneity, uniformity, and ability to follow rules. It is not the fighting but the formation that appeals to Beecroft.

However, to portray Beecroft as the commander of an army of models is to fail to account for an important aspect of her work. It is something like planned obsolescence: the artist dictates the initial conditions in order to create the formation-image, but subsequently she allows the work to crumble and decay. It is as though there exists, among the explicit rules to be silent and immobile, another unspoken directive which it is intrinsically impossible to fulfill: defy gravity. If Beecroft’s work resembles nothing so much as the Porch of the Maidens on the Erechtheum at the Acropolis, it is because of this strife between girl and gravity: whereas the caryatids at the Porch of the Maidens are pillars formed like girls, Beecroft treats her girls rather like pillars, requiring them to stand at attention for the long pointless hours of any one of her exhibitions. And although the girls may be spared the discomfort of a pediment on their heads, really Beecroft just redistributes the weight, since the girls are obliged to wear high heels. This has the effect of minimizing the area of surface contact between the model and the ground, literally reducing the plane of the foot to two points (a toe and a heel), thus making it more difficult for a girl to support her own bodyweight. After a few hours of standing it must no doubt feel like carrying a marble roof on one’s head.3 And perhaps at such a point Beecroft’s cruel classicism inspires one of her models to remark that, although there are conventions regarding the usage of human beings in science and war, there are none in art.

2. For example, according to Arnold Hauser classical art is "characterized by the absolute discipline of form, the complete permeation of reality by the principles of order, and the total subjection of self-expression to harmony and beauty." Arnold Hauser, Mannerism (Cambridge: Harvard University Press, 1986), p. 4.

3. "On average, about 60 percent of a person’s body is water… On earth, when a person stands up, the weight of this water exerts forces throughout the body… Going from a prone to a standing position moves fluid into the lower part of the body and reduces the flow of blood back to the heart. If unchecked, quiet standing can lead to fainting; soldiers sometimes swoon when standing at attention. Two other hydrostatic effects are varicose veins, which have become permanently distorted by the extra fluid, and swollen feet." Ronald J. White, "Weightlessness and the Human Body," Scientific American (September 1998), p. 60.