Written and posted in October 2001. 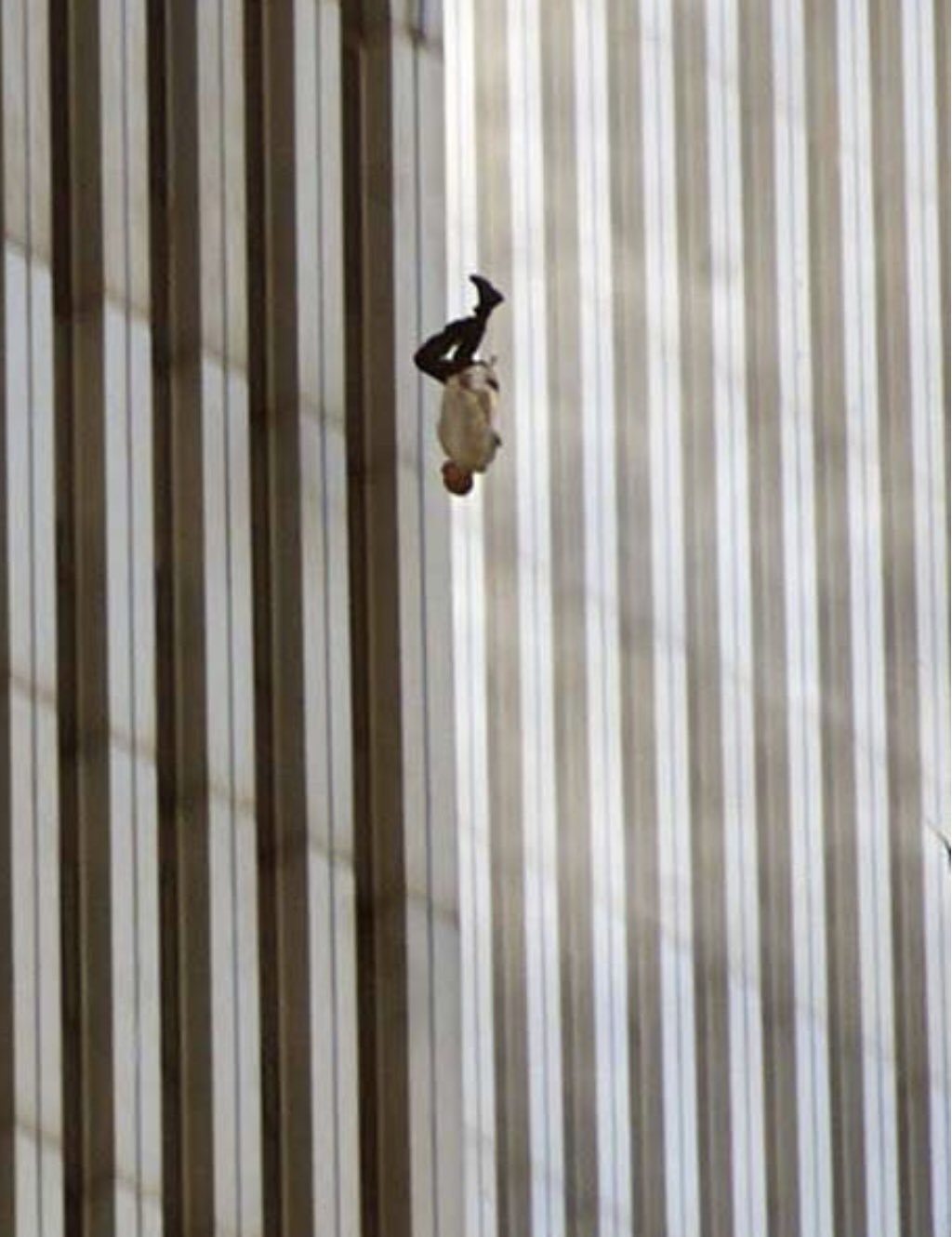 When you hear about the planes smacking into the World Trade Center you rush up to the roof to see black greasy smoke spewing from the jagged holes the planes made. The Twin Towers are burning like sooty candles. After fifteen minutes you feel stupid standing there watching them burn, so you take the elevator back downstairs. You come in the door and someone says, "One of the towers just collapsed." You don't believe it. You know the towers were constructed to withstand a hit from an airplane. "Impossible," you say. "I just saw it. You don't know what you're talking about." You go back up to the roof, and there's just a big white cloud of chalk dust shrouding lower Manhattan. You can barely make out the remaining tower. Then that falls too.

"Jesus," you sputter. What more can you say? Shit? Damn? Fuck? You feel utter disbelief, combined with a kind of awe — it really was spectacular — and of course horror, sadness, shock.

Everyone's got a dozen or more stories about it. There are eight million people in New York City. Do the math and you'll see how staggering it is. The city is drowning in it. Nobody talks about anything else. There are TVs everywhere. Radio in the elevator. Gossip on the street. When you go to bed at night you discuss it with whomever you go to bed with. When you stop talking, it still reverberates in your head. You play it through in a thousand scenarios: What if I'd been on the plane? What if I'd been in the building? It's like being trapped in a big echo chamber.

There are stories of coincidence and luck and bad timing and good. There are tragic stories and heroic stories and sick stories. A friend's sister is a cop working at the debris site. She got her foot stuck in something that turned out to be a human head — somebody's loved one.

Words like "evil" and "heroism" are being flung around like shrapnel. But what about perversion? What can you say about perversion in light of the bloodiest act of terrorism in world history?

If it seems uncouth, insensitive, cruel, even solipsistic to speak of perversion in a time of terror, it is precisely because the immediate effect of the "attack on America" is to achieve through violence what Nietzsche hoped to achieve through philosophy: a revaluation of all values. In a moment, the country turned on its head. The stars and stripes replaced the black flag of cynicism. New York cops who were thugs a month ago — accused of "racial profiling" and inserting a plunger into the rectum of a minor criminal — were suddenly heroes. And perhaps this was not just a shift in perception: terror really seems to have brought out the best in everybody, terrorists not included.

It's quite possible that this attack on America will initiate a whole new moral climate — that it will wash away the accumulated stains of Vietnam, Watergate, Iran Contra, the Savings and Loan scandal, Ruby Ridge, Waco, Monica Lewinsky. Everybody will get all patriotic and moral and clean and upright and they won't want to indulge in works of frivolous decadence anymore. Pity Marilyn Manson — will the rock star not be indicted precisely as an expression of the "weakness" and moral degeneration that terrorists impute to America? It's not easy to sell an album parodying right-wing gun fanatics when the entire country is suddenly screaming for retaliation and blood.

But what are you fighting for? "Freedom," they say. "Democracy. Self-determination. The right to choose. The pursuit of happiness."

That's true, and that's noble, and that's great. But think about this: perversion is simply an extreme form of freedom of choice. The greatness of a society can be measured precisely by its ability to allow, even embrace, perversion. If you're fighting for freedom, you're fighting for the right for some people to do things that you may personally think are indescribably weird.

In a closed, repressive society, perversion is itself a kind of moral terrorism. It threatens the social order. Conversely, in an open, democratic society, perversion is an extension of the social order. It takes freedom to the nth degree. In America, S&M is OK. Foot fetishists can do their thing. Homosexuals form political interest groups. In the future, rather than a mayor being impeached for pedophilia, maybe pedophiles will run for mayor. Who knows? In a free society, it may turn out that perversion is where the pursuit of happiness crosses the finish line.

It follows that when terrorism is an attack on freedom, it is also an attack on perversion. It's difficult to pursue sexual weirdnesses when the world's falling apart around you (unless you're a necrophile, in which case the sudden surplus of dead bodies must seem fantastic). If indeed the culprits behind the attack on America are religious fundamentalists, there is nothing they want less than to see you carry on with unwholesome practices and freaky obsessions. If there were a ground zero of perversion comparable to the World Trade Center, you can be sure they'd bomb that too.

Conversely, this also suggests that perversion gives you power. There is nothing so bothersome to religious fundamentalists than a public display of sexual weirdness. Its weirdness offends their narrow morality, and its openness rubs their nose in the fact that you live in a free country. So you want to fight terrorism? Indulge yourself. Get kinky. This is not to say that you shouldn't help out in other ways, that you shouldn't have compassion for those suffering. But it is to say that you can maintain the American way of life simply by living out your fantasies, however sordid they may be.

The President himself asserts that the way to take the shine off the terrorists' brightest hour is by returning to "normal." Get on with your life. Don't let them disrupt you. Show them you're not immobilized with fear. If you're a pervert, this means getting on with your perversions, and if you're Supervert, this means the important work of superversion must continue...