This manifesto was originally distributed by Necro Enema Amalgamated in its "Little Pink Book" series in 1992.

Who is Necro Enema Amalgamated?

The NEA is a Devil's Advocacy group and entrepreneurial innovator of manipulative software, subliminal semiotics, and coercive advertising. It was founded by Supervert (Necro) and Swensonia (Enema) on a clear autumn night in October, 1992. Like the National Endowment for the Arts, Necro Enema Amalgamated plans to give money to people who spend their time prettifying the world with their creative energies ("artists") and, like the National Educational Association, also hopes to give shape to the nation's educational policies (see our forthcoming review of Toilet-Training the Retarded for a taste of what's to come!). The NEA's flagship venture, BLAM!, is a hypermedia explosion that concentrates bad energy, good looks, big muscles, and a small mind into one Mac-readable CD-ROM. We believe that BLAM! will do for hypermedia what St. Paul did for Christ, what rats did for the plague, what Edie Sedgwick did for the miniskirt — bring it to the masses. There are no strong words, only weak ears.

What is Devil's Advocacy?

When the Catholic church nominates some virgin stiff for beatification or canonization, the duty of the advocatus diaboli is to raise objections and examine the facts. For example, the cadavers of true saints are not supposed to rot, so the Devil's Advocate might take it upon himself to demonstrate that however impervious Mother Superior may be to the charms of penises, she can't help but spread for the worms. That is what it means to play the devil: to prove the mortality of the saint, to take up any cause in the face of even the most hallowed truths, assertions, or beliefs. This does not mean that Devil's Advocacy is nihilistic. Why fight for Nothing when it is the vigorous heartbeat of struggle that keeps the lifeblood pounding in your veins? With the instincts of a true mercenary, the Devil's Advocate takes up any banner with that terrific war cry: Yes! "Profound aversion to reposing once and for all in any one total view of the world," as Nietzsche says. "Fascination of the opposing point of view: refusal to be deprived of the stimulus of the enigmatic." We're not God's antagonist, we're the Devil's Advocate. When we say No, we mean Yes. 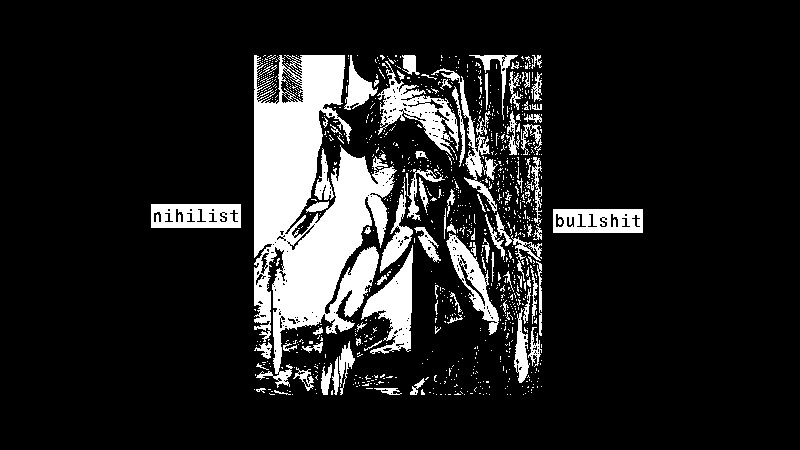 The truth about cyberspace.

To judge by some of the popular and academic rhetoric that surrounds it, "cyberspace" is sort of like heaven: a place where people can connect seamlessly without judging each other in terms of zits, big tits, or appalling bodily disfigurements. Joe can be a mutant pickle-man, but his dry sense of humor can earn him friends on the Net. Isn't that swell? The NEA answer: Yes, it's swell, if you happen to have the frosted-flake ideals of a church-going Johnsonian Democrat. On one hand, there's the version of cyberspace promised by latent Puritans (with all of their obligatory contemptus corporis). Notions of assisted psychic and spiritual disembodiment are nothing new, so why promise more mana to the masses? Every enthusiasm for a disembodied, religious cyberspace is an insult to sensuality: Virtual Reality for eunuchs, ascetics and priests. On the other hand, there's the version of cyberspace promised by those good-intentioned hangovers from the Summer of Love: Virtual Reality for communes, farms, and planned communities. It has all the saccharine equalities promised by the Puritans, only this time from a political rather than a covertly religious standpoint. "New Age" doesn't describe it as well as "Old Fart." Democracy, as the cynical Helen Keller pointed out, is but a name. "We vote? What does that mean? It means that we choose between two bodies of real, though not avowed, autocrats. We choose between Tweedledum and Tweedledee." Face it, public. Charles Manson was right. "Nobody wants responsibility. They want to be told what to do, what to believe, what's really true and really real." Buy BLAM!!

There are two things to be remarked about the history of the concept of space: the first is that it has theological origins (i.e. space as an attribute of God: "Newton thought it necessary and expedient to make these theological ideas an integral part of his theory of space," writes Max Jammer in his History of Theories of Space in Physics.) Perhaps this helps to explain the reverence with which the very word "cyberspace" is uttered by those lambs who have seen the virtual light. The other interesting thing about the history of the concept of space is that it appears to precede time as a category of consciousness. This is evidenced even by the way we speak of time in spatial terms: we say thereafter instead of thenafter, always instead of all the time, and so on. Space, then, is the more primitive category of thought, and perhaps it shouldn't be surprising that — with so many modern primitives running amok — few have risen to the task of conceptualizing the role of time in digital media. (This is excepting the one group of non-philosophers who consistently manipulate digital time: capitalists, whose temporal pretensions can be summed up in the price of connect time.) Maybe this is obvious, and yet it seems as if every other product on the market is based on spatial metaphors. The whole idea of "exploring" a digital space has been grossly overused, especially since exploring is essentially boring. What makes Raiders of the Lost Ark exciting is not the endless treks through jungles and deserts, the sheer drudgery of which is never conveyed on screen; what makes Raiders exciting is that it has a plot, and a plot is a structuring of time. Though the first issue of BLAM! is structured around the spatial metaphor of mine shafts, we have also rediscovered the lost continent of cyberspace — the fourth dimension. In BLAM!, we have manipulated time in essentially three fashions: through plot, montage, and speed — especially speed. (Go see for yourself. Only $25.00 + p/h + tax for New Yorkers.) As Sun Tzu says, "Speed is the essence of war." 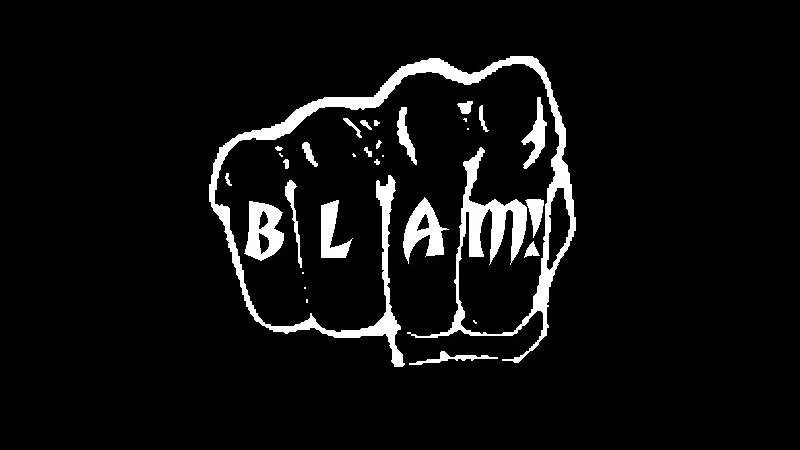 The absurdity of interactivity.

"Interactivity" is one of those euphemisms like "democracy" or "equality." There's no color to the word. It paints a grey picture of a world where used-car salesmen would give you your dollar's worth, little boys wouldn't pick on little girls, and snakes wouldn't eat cute little furry creatures. There's no food chain in a word like "interactivity." That's why at Necro Enema Amalgamated we think of it not as "interactivity" but as offense and defense. All that no-caffeine rhetoric about empowering users makes us laugh — not with but at. (Laughter is Satanic, says Baudelaire, and since we're the Devil's Advocates, we find ourselves laughing a lot!) Giving a user more and more buttons to click is like giving extra links to a dog chain. Sure, you can call three feet of mobility "freedom," if you want. You can think of BLAM! as empowering you, but we know that we're the ones jerking the end of your chain. We've determined what every last little button accomplishes. Programmers are just that: programmers. We train you to use BLAM! just as Pavlov trained dogs to salivate. Did you know that "cyber" comes from the Greek kybernan, meaning "to steer, to govern?" Maybe we could reconcile ourselves to the concept of cyberspace, after all — if you define it as space (or more correctly, space-time) that we control.

The textbook for user manipulation.

Foster Goodwill reads about BLAM! in Mondo 2000, rushes out and buys a copy. When he gets it home, he reads some of our propaganda: We're joy riding on the roof of an elevator and the 21st century suddenly approaches like the ceiling of our tenement building. What do you want to do? Do you want to get off? Yes? No? BLAM!! Excited, Goodwill loads the BLAM! CD into his drive and follows our instructions for starting it up. The interface appears and turns the sound on his computer up, up, up! He's frustrated he can't turn it down, but perseveres. He chooses to view a piece by Th. Metzger, infamous rant ejaculator and author of This Is Your Final Warning! (Autonomedia). He doesn't finish reading it before he tries to quit out. Surprise! Necro Enema Amalgamated insists that you read a piece by Th. Metzger, and so Goodwill is thrown into a special punishment supplement — "Devil in a Dead Man's Underwear," an epic poem about Spam written by Th. Metzger. He can't get out of it, except by crashing his computer, which he's afraid to do. (If he'd finished reading the first Metzger piece, he wouldn't have to suffer through "Devil.") Goodwill gets back to the interface and tries another piece: "Fever," by a mysterious Rita. At first, it sort of reminds him of a Japanese cartoon, and the animations of an apparently young girl crying in the bathroom turn him on. He likes the "interactive" features — he has to click the girl's cunt to drive the piece forward — but it puzzles him that clicking her cunt only offers him that one option: forward. Is that interactivity? Or is that irony? Goodwill gets back to the interface and looks for an explanation in Necro Enema Amalgamated's "Ode to Interactivity." He discovers that the "Ode" is not the least bit interactive. What sort of tribute is that? (Excerpt from an interview with the creator. "The 'Ode' is predicated on the dilemma. When I was making it, I thought: What if you had a choice, but it was between two equally terrible alternatives? What if your button-clicking necessarily triggered the most heinous rapes, murders, and so on? I wanted the 'Ode' to embody such dilemmas, but then I removed the interactivity. I removed the choices altogether.") Confused, Goodwill finds enlightenment again in our propaganda: BLAM!! It's not "immersive," it's expulsive: sounds so loud we've had noise complaints from the dead, type so big Martians can read it by means of the naked eye, rants so hard they knock the wind out of you. BLAM!! We don't wait for you to push our buttons, we push yours first.

Necro Enema Amalgamated is not just the publisher of BLAM!. It is not just a hypermedia design studio. It is an aesthetic, a way of life, a couple of Neat Enthusiastic American guys who use computers sometimes — sometimes not — to spread their word: God is in the details, but the Devil is at large.