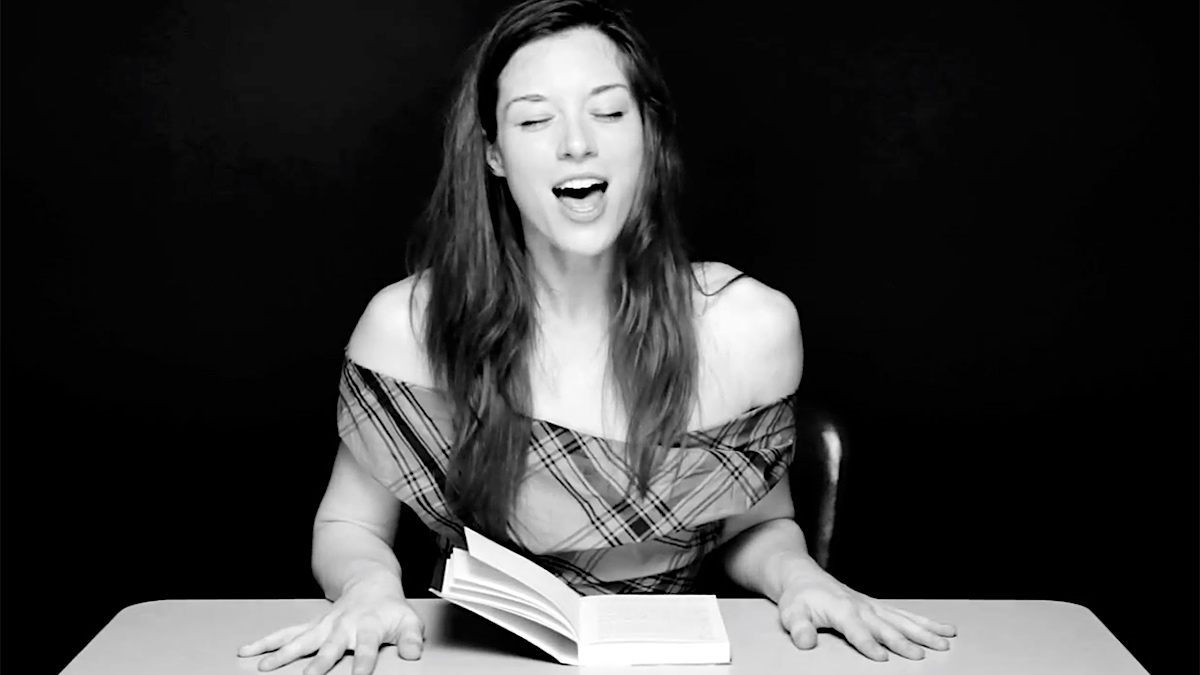 The concept is pure genius, a demented equivalent of the experiments sex researchers undertake in MRI laboratories as they scan the brain at the moment of orgasm. It sets up a conflict — mind vs body, more or less — and dramatizes it in Stoya's physiognomy. She attends to the book, her mind presumably filled with the words, and then her body slowly takes over, emptying her mind and forcing her face to broadcast the rest of the body's sensations. How long can she hold out? The text becomes a timer. You wonder if she can make it to the end. She doesn't — she climaxes about a paragraph short — and her studied expression gives way to a riveting combination of ecstasy and glee.

In filming this experiment, Cubitt makes an important aesthetic choice. He shows neither the vibrator nor the accomplice operating it, though a slight buzzing sound is audible underneath Stoya's voice. This positions the video in opposition to pornography, where the sex act always occupies center stage, and aligns it with an artistic tradition which recognizes that withholding can be a powerful way of conveying information. You see this in Andy Warhol's film Blow Job, in which the camera registers the transient emotions on a young man's face as he is fellated by an off-screen partner. Similarly, by withholding the Hitachi and the female using it to destroy Stoya's composure, Cubitt channels that there-but-not-there sexuality into the things which he does permit you to perceive: the crescendo of sensation building on Stoya's face; the movement of her hands, which are imbued with an eroticism they would be denied if the frame included the diverting sight of genitalia; the transformation of her voice, which begins in narration and ends in gasping.

In a post providing some background on Cubitt's experiment, Stoya indicates that the pleasure she expects from Necrophilia Variations is one not of orgasm but of understanding. She was motivated to choose the book, she writes, by an "oddly non-morbid obsession" about the way "orgasm affects brain chemistry," the appropriateness of the French slang la petite mort, and "why my mind goes completely blank when I'm at the height of a sexual experience." The book can't answer these questions the way a researcher in an MRI lab might. However, when I think of Necrophilia Variations, I do see it as a sort of brain scan. If you write with sufficient intensity, you attain a state that is the exact opposite of a blank mind: it is a plenitude or even overgrowth of mind that blanks out the body and the world. You become the cogito of Descartes or a brain suspended in a lukewarm liquid like in a sci-fi film. It can be deranging, like a delusion. If the blank mind of orgasm is a "little death," this is more along the lines of a "little life," an act of creating something from nothing. Fiat ars.

This pathology of the creative state is experienced by readers in a lesser way — curled up in bed with a good novel, the world dropping away as a compelling narrative unfurls. The experiment to which Cubitt subjects Stoya is designed to foil this, to prevent the reader from getting lost in the text by using her physical pleasure to undermine her concentration. Something complex and ironic occurs. Wanting to understand what happens when orgasm causes her mind to go blank, Stoya turns to a book whose creation required the writer to blank out his body. Meantime what is happening to her body deprives the book of its ability to deliver whatever answers it may have. The words are reduced to emotive groans and, when Stoya's face lights up, it is an indication that her mind has gone dark. Cubitt films all this and the smile that persists on Stoya's face through orgasm suggests that she never quite achieves enough blankness of mind to lose awareness of the camera. Fittingly the text she reads, "Confessions of a Skull Mask," describes an event playing out in front of a video camera. (Update: Stoya says "I totally smile like that when I'm with one person at home with no cameras, too.")

Death and consciousness — these are at the heart of Necrophilia Variations. Cubitt's aesthetic and Stoya's performance are what make "Hysterical Literature" stand on its own as video art, but what thrills the silent partner in the ménage is to see how their experiment extends the spirit of the book. They take an impulse from the text, translate it into another medium, and beam it into the world anew. Bravo.